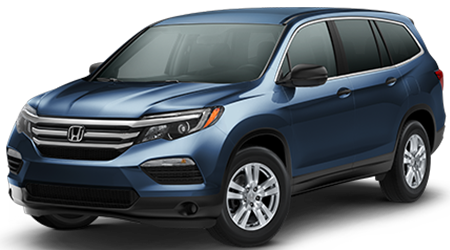 Picture tackling Pennsylvania's roads in a stylish and versatile 2016 Honda Pilot; freshly redesigned for the new year, this sleek SUV is at the top of its game with an all-new look and a healthy dose of futuristic. If you're looking for a midsize SUV that can tackle it all, then visit Jefferson City Autoplex Finance in Jefferson City, MO. As one of the state's top-ranked dealerships, we proudly serve Jefferson City, MO with a large collection of Hondas in stock. For a capable midsize SUV to use on a regular basis, explore the 2016 Honda Pilot. Visit Jefferson City Autoplex Finance at 3625 Missouri Blvd and explore the new Pilot today.

The 2016 Honda Pilot s an all-new vehicle for the automaker. The midsize SUV has benefited from a complete overhaul, which also includes a sleek exterior that gives the vehicle a more modern look. To complement the Pilot's new exterior styling, the SUV gets satin finishes, high-end materials and soft-touch surfaces on the inside. With all of these new features, the new Pilot is a much more luxurious vehicle and can tackle all of your tough jobs with ease.

Engine Performance for the Honda Pilot

To make the new Pilot even more versatile, the new midsize SUV has a brand new engine underneath its hood. The SUV is now powered by a 3.5L V6 that generates 280-hp and can put power down through its front wheels or through an optional all-wheel drive system. To save you money on fuel, Honda packed the Pilot's engine with all of the latest technology, which includes advanced fuel injection and auto start-stop. The new engine can be matched to a six-speed automatic transmission or an all-new nine-speed automatic transmission.

Interior Features on the Pilot

While onlookers and other drivers on the road will fall in love with the new Pilot's styling, drivers will appreciate the SUV's comfortable interior. Honda placed all of the latest technology and comfortable features to keep occupants cozy at all times into the new Pilot. Interior features on the new SUV include:

If you've been searching for a midsize SUV that has all of the latest technology features, a comfortable interior and elegant exterior styling, then the 2016 Honda Pilot is the vehicle for you. For an amazing price on a Honda, visit Jefferson City Autoplex Finance in Jefferson City, MO. We're proud to be one of the state's top-ranked Honda dealerships and will provide you with a first-class experience. Stop by our dealership at 3625 Missouri Blvd and test drive the Pilot today.